In order to learn we often have to step outside our comfort zone. In the last two weeks I’ve been so far outside my comfort zone I almost needed a sat nav to find my way back. The problem with being out of your comfort zone is often that is the trigger for our personal demons to make an unwelcome appearance.  Those that know me are aware in my spare time I practice martial arts (karate to be specific). Only this week my instructor was telling some junior competitors about the demons that can suddenly appear when you take that long walk up to the mat for your fight.

I’ve been there myself, you look across the mat to your opponent and in an instance any personal self doubts you may have about your ability are transformed through your thought processes to create a distorted image of your opponent; depicting them as superhuman, and of gigantic proportions. All of a sudden  they’re twice your height and width, you look at the length of their arms the size of their fists and in a split second you have created  in your mind someone that is unbeatable and you’ve talked yourself out of winning before the fight has even started. You become unable to fight or use the skill you know you have, you crave to be back in your comfort zone ( in your head you’re wishing you were in your PJs watching telly at home) and as you try fighting with the equivalent of a car hand brake half engaged,  your demons win the fight.

In life people talk about facing your demons. For a child of the seventies that spent her youth watching Dr Who from behind the sofa, having to face up to my demons seems a bit brutal and frankly scary and it also implies an element of confrontation with oneself. So I’ve decided maybe what I need to do instead is simply unmask the demons- just like in Scooby-Doo it’s bound to be the caretaker or some pesky kids- right?

So what are my demons, well someone close to me told me I’m a perfectionist (I’ve known that for some time). The point he was making was that this often means I worry a lot about whether my performance (whatever the setting) is going to be good enough. If you allow it (and I have on many occasions) this can be disabling, destructive and exhausting.

So how do you un-mask your demons and stop them from holding you back? Well there are a few strategies I’ve learned from my karate instructor and from intrapreneurs I’ve spoken to through my research.

So now when I find myself out of my comfort zone and the demons start to appear I try to remember:

my opponent ( the audience, the company CEO) may be big and scary, but they’re human and vulnerable just like the rest of us. They may come with an impressive reputation, but it’s what happens in the here and now that matters at this moment. I remember I’ve  prepared for this, I’ve put in the training, there is nothing they can throw at me that I’ve not handled before. I’m  ready, there’s no need to panic my team are behind me all the way, and when the time is right I’ll hit them with the best of what I’ve got. Whether I win the funding bid or I get a standing ovation for a conference presentation ( that never happens by the way) is not really important (although the boss would probably say otherwise). What’s important is that the demons don’t win, because they will only grow stronger and more disabling. So here’s to unmasking demons- and let the fight begin! 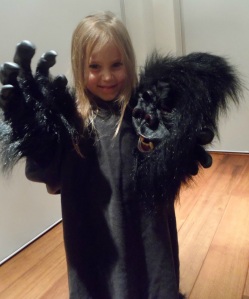