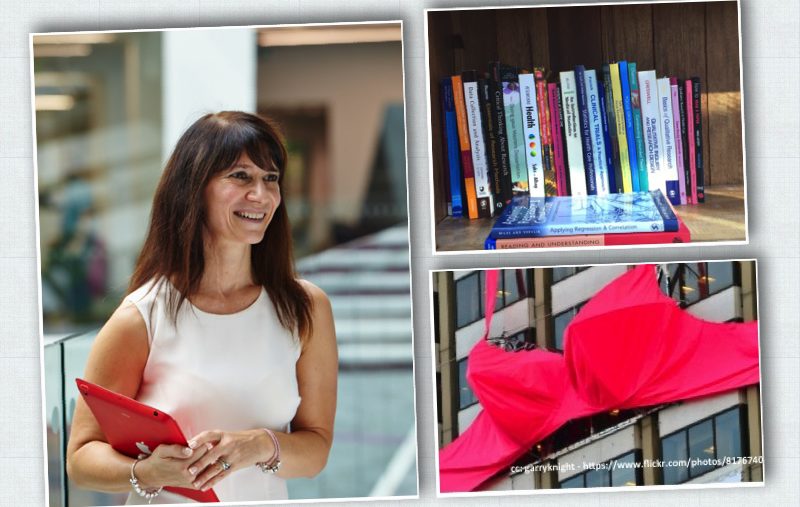 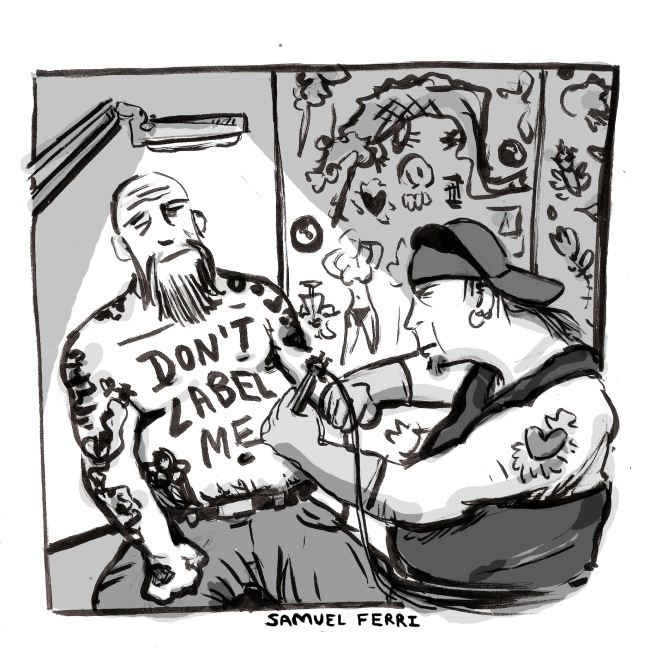 When someone mentions tattoos what is the first thing that comes into your mind?

Do you think of a heavily tattooed man or woman? Your own tattoo perhaps? As a Therapeutic radiographer the word tattoo makes me think of radiation treatment positioning. During the planning for radiotherapy, Radiation Therapists/Therapeutic Radiographers will mark a patient’s skin to indicate a reference point for positioning the patient each day underneath the linear accelerator. More often than not these reference points are made into a permanent mark, a tattoo, using sterile Indian ink and a sterile needle. These permanent tattoos act as a reference point for each radiotherapy session helping to align the patient with the treatment machine with the aim of increasing treatment accuracy.

Radiotherapy tattoos are small; they are less than 2mm in diameter. Images available to view online at CRUK website and here on this personal blog show the actual size. So what’s the fuss? They’re tiny right? So why write a blog about them?

Well here is the problem. While they are small they are permanent, and act as a permanent reminder for many patients of an experience and a time in their life they may want to forget. This quote from a blog by Andrea Hut really exemplifies what many women I’ve come across over the years as a Therapy radiographer express:

“The tattoos themselves are just tiny bluish dots. They’re barely visible, but they are permanent. Nobody told me that. It’s as though they think you wont care because of all the other stuff you’re going through. I’m sorry, but I care about any permanent mark that’s being made on my body. Especially the ones I didn’t choose. Scar or tiny black dot.”

So how accurate are they? Set-up accuracy for breast irradiation is dependent on a range of factors including the use of immobilization devices such as breast tilt boards, how the patient’s arms are positioned (one arm up versus two arms up) and support cushions, as well as patient factors (such as breast size). Using tattoos for positioning can enable accuracy of radiotherapy field placement in the region of 2-6mm(1). Where partial breast irradiation is employed accuracy between 3-7mm(2,3) have been reported. Accuracy using semi-permanent skin marks alone have been shown to be comparable to accuracy achievable using tattoos(4) where average systematic errors were 3mm for those patients with tattoos and 3.3mm for those with semi-permanent skin marks. The disadvantage of using semi-permanent marks is the need for the patient to take care when bathing to avoid the marks disappearing; this can cause patient anxiety, and could necessitate a re-planning of the radiotherapy, potentially delaying treatment.

It’s all about choice.

Body tattoos have been a part of human culture for a long time. Initially, tattoos represented a specific aspect of culture either identifying the bearer to a religion, strength or social status. In European culture in the 20th century body tattoos have been associated with groups such as sailors, and bikers and with the advent of the punk scene they became an expression of antithesis to mainstream culture. The 21st century has seen a rapid rise in body tattooing; with tattoos no longer seen as solely representing a tie to any specific sub-culture or group. Wohlrab, Stahl, and Kappeler(5) identify 9 different motivational reasons for obtaining a body tattoo:

Except when the individual obtains a tattoo while under the influence of alcohol or drugs, the majority of these motivations above represent a personal choice, a reasoned decision to gain a permanent embellishment to their body.

Take Eve for example, here is her tattoo and her motivation for getting it. 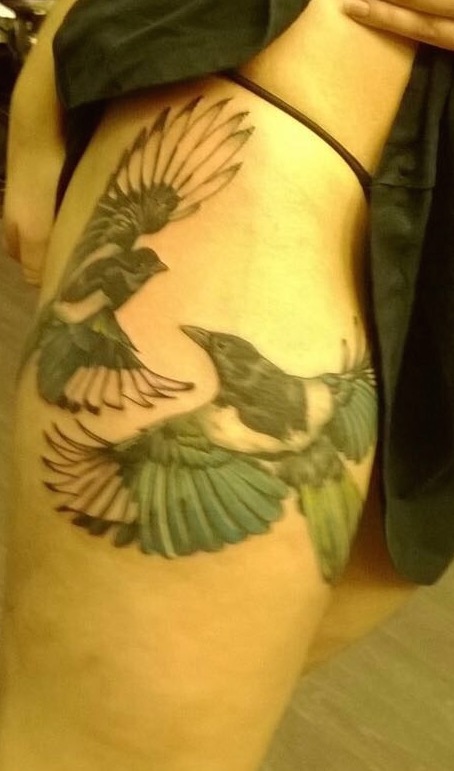 “My tattoo is two magpies representing the old saying ‘one for sorrow, two for joy’. The saying is based on the fact that magpies mate for life so when you see two together you know they are happy and in love. Whenever you see one magpie you are meant to salute the bird so that you respect his loss as he no longer has a mate, and I have been doing this since I was little. By having the tattoo I will see them everyday and everyday ‘hopefully’ I will have joy in my life.” Eve

Eve tells us about her decision to get a tattoo:

How long were you thinking about getting a tattoo?

Eve: “I thought about it for a couple of years as I had to wait until I was 18 years old before I could get it done.”

What made you want something so permanent?

Eve: “I have never been worried about it being permanent, as it reflects my personality and is something I believe in.”

Were you worried about what people would think? If not why not?

Eve: “ I have heard of people talking about people with tattoos as being wayward, however, I do not believe that. Most people now a days are not as judgmental, as more and more people are getting inked.”

Do you think you will ever regret it?

Eve: “No never, it will always reflect that period in my life.”

Eve’s motivation for getting a tattoo is clear, it represents something of meaning to her, something that she see’s will bring her joy and is a part of her personality. Eve’s is just one story, but most motivations for getting a body tattoo reflect a positive connection between the individual and the permanent image they choose. Patients that are tattooed during the radiotherapy planning process have less choice. The permanent dots, although small are unlikely to add or improve their appearance, and for many simply may act as a reminder of cancer treatment. For some cancer survivors they are an unwelcome reminder of a difficult time in their lives. These quotes below from our most recent research highlight the mixed emotions patients with breast cancer experience during the planning of radiotherapy and coming to terms with the notion of having permanent tattoos. (All the names have been changed to protect the individuals’ identity). Emotions and experiences are diverse and serve to highlight the need for healthcare practitioners to understand the individual patient journey:

“I’ve written a couple of things down there that kind of go back to something that Maryanne said about choice, you know the tattoos and not feeling like you have a choice.”

“…when they put the tattoos on so it was all in the same incident, I did feel suddenly there that there was something permanent happening because you know they say these tattoos are permanent, up to then it felt like you know we’ll cut this out, I’ll get better, it’ll go away and then they went no you’re going to be permanently tattooed, I felt like you know you’re going to make me tattooed and marked ………. I did, I felt a real sense of loss at that point and I thought no this is not something I’m going to get through this is something that I’m stuck with and it’s silly really because it’s just tattoos and I’ve got used to the tattoos and I don’t notice them.”

“some of these points to an outsider may sound small, like the tattoos, I wasn’t happy with those either, but because you’ve lost you know your sense of self and your confidence it just, you know every little thing even though it’s small like using different cream or something is a really big issue.”

The picture is clearly mixed, while there are negative experiences associated with patients having tattoos like those above. The complete picture includes many positive attitudes towards radiotherapy tattoos:

“small, discreet, only a few in number, quite freckley skin anyway, don’t mind needles, nothing to worry about compared to chemo, needed to keep me alive so what’s the problem?”

Some women even choose to change their radiotherapy tattoos into works of art on completion of treatment as this Guardian article highlights. It’s clearly all about choice.

So what are the choices?

Well let’s not throw the baby out with the bath water just yet. Permanent tattoos have been used for many years to mark the placement of radiotherapy beams for a range of cancer sites. For those women that don’t mind having tattoos they remain, at the moment, possibly the best alternative and an option patients can choose. It might be worth Therapy Radiographers/Radiation Therapists considering where they position the tattoos and the number used. Where possible, if tattoos can be positioned where they are less likely to be visible when the woman is dressed in her normal clothes, it may make them more acceptable to some women. In addition, for standard whole breast radiotherapy (where only the breast or chest wall is treated and not the lymph nodes in the neck) what is the optimum number of positioning tattoos that are needed to retain accuracy? There is no research evidence for us to use, and nothing to indicate that five tattoos are better than three for example; so will three suffice to improve the cosmetic outcome?

For those women that don’t want to have a tattoo the use of semi-permanent pen marks is often used with special dressings (that act as a clear skin) to avoid the marks rubbing off onto clothes and to maintain longevity. Semi-permanent marks come with restrictions on washing but can be as accurate as permanent tattoos if application is maintained carefully(4). Some centres have access to 3D surface imaging that can complement patient alignment and enhance accuracy of set-up; unfortunately not all radiotherapy centres have such a facility.

A recent trial has tested the viability of using ultra-violet (UV) ink for permanent tattoos. This option means that the tattoos are not visible in normal daylight conditions and only visible under UV lights that are applied in the treatment room. The use of UV tattoos still requires a needle prick to get the ultra violet ink underneath the skin. However, it may offer a solution in the future, and we await the published results of this recent trial to see the full benefit in terms of accuracy for treatment and acceptability to patients. The use of UV ink for tattooing is a fairly new development and we currently don’t know if there are any long-term risks associated with using UV ink for tattoos. It does also mean that while the radiotherapy tattoos would remain invisible during normal lighting conditions under any ultra violet lighting such as those sometimes used in clubs and restaurants the tattoos maybe visible.

Another future solution that could provide patients with an alternative to permanent tattoos (either indian ink or UV tattoos) is the use of a well fitting immobilisation device where the set up marks are incorporated within the device. This approach is used for radiotherapy application to areas of the head and neck where an immobilisation mask is fitted to the patient and marks placed on the mask rather than on the patient. We are currently developing a support bra for women undergoing breast radiotherapy that may allow for marks to be incorporated within the bra, avoiding the need for skin marks or tattoos on the patient; details of the SuPPORT 4 All study can be found here.

Is there sufficient choice for patients? What’s your view?

4 thoughts on “Let’s talk about tattoos”